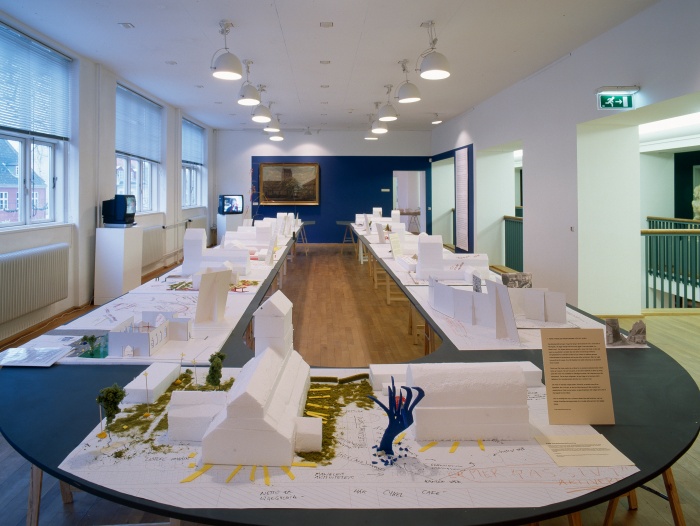 From the exhibition  appropriated as a negotiation space.  All photos by Torben Eskerod.

match-stick-car-liquorice-shoe-lace was a response to an invitation from the Museum of Public Art in Køge / KØS to propose a possible reorganizations of a specific spot in the close vicinity of the museum, located in the urban centre of the small conservative merchant city Køge. This passage and the small place close by in front of the museum was however the subject of a slow on-going conflict of interest between the museum and its neighbours.

I appointed myself as a mediating part and the museum space as a kind of transitional zone, and invited all interested parties in relation to this conflict, one by one, to present their point of view to me. The process took 8 weeks and was performed in autumn 2004 in collaboration with landscape architect Jonas m Schül. The final outcome was not a consensus, but an identified model of compromise, accepted by all participants. In the end, however, the proposal was never realised by the municipality. ( for further info, please scroll down) 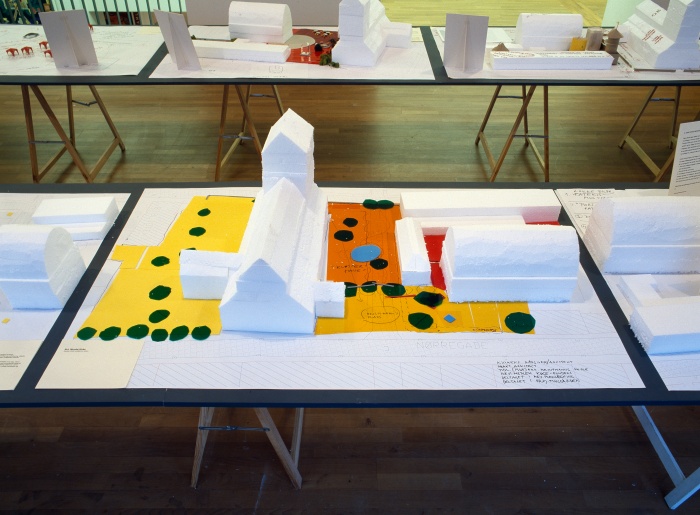 I was formally invited to elaborate a proposal for how to possibly use the space inbetween the buildings.  But from the start I was cautioned by the museum, not to upset the School Board -“and absolutely not the vicar!” this is how I learned how all neighbors to the church, were involved in a long term disagreement about how, and in particular how not to alter the culturally sensitive area around the church. However low key inits expression, this dispute had actively influenced the way in which the various neighbours related to each other.

I decided to enter into the debate by organizing a kind of baton. All the different groups of interests were invited to the museum one by one;  School children, teachers, school board, church council, church ministers, church architects, library staff, representatives from the local commercial association, local politicians, staff of the local history archive, the directors from the Art museum, and finally a group of public officials of Køge municipality.

The idea of a baton was signalled through the unusual composite of the exhibition title, referring to a well known Danish children’s word-adding-game. As a point of departure, I posed all groups the same simple question ; What would it mean to them, if I was to remove the two existing brick walls, currently placed between the church and the old school?  Each group was to respond to my question, by making a rough architectural model of the site, as an image of their perception the perfect solution for it.

When arriving to the project-space, I mediated the earlier sessions and models. This is where the baton mechanics  indirectly forced each group to start with taking in, what previous groups had already formulated. All midels therefore mechanically came to include a response to needs and wishes pronounced by others.

I was just the listener, Jonas mostly just helped out with model building. The rest was but “..the cat on the rat, and the rat on the rope...” By the end of the 8 weeks round of dialogues, the last model did not only represent a fully plausible proposal for a new public space all around the church. It also proposed for the area to function as a common “playground” / social platform for all  generations of Køge citizens. The zone of conflict was for a while re-imagined as a common field of interest. However. due to municipal elections the  proposal was never realised.