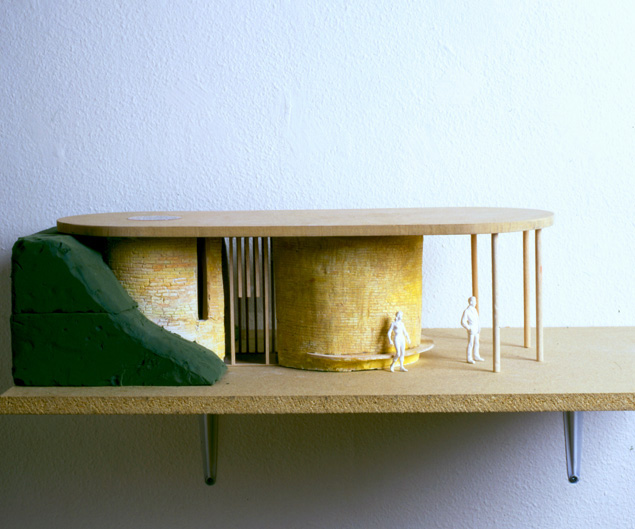 Model of the proposed building for a digital archive of local memories of the new urban area.

The Memory Box  is an integrated part of my Trekroner Art Plan Project from 2001-2011.

It consists of a 1:1 collection of images, intended for a local self-governed digital museum in relation to new urban areas.  The collection consists of several undreds of images of all kinds – plans, budgets, texts, photos both historical recordings of the former area and later photos from the new urban area.

Above is the model of the physical museum I hoped to build in the new area. This museum is not yet realized. But the collection was shown at Museum of Contemporary Art in Roskilde, in 2003 with an exhibition entitled Overblik – kunsten og byen der endnu ikke er.

In 2011 I donated this collection to the local residents cultural association – Trekronerrådet.

I wrote the Trekroner Art Plan in 2001, as a response to a brief from the Danish National Arts Foundation and Roskilde Municipality. In the original brief, the commissioners asked for how contemporary artists could operate within the highly determined planning process?  The response was delivered in 2001, and was subsequently realized in major parts through the Trekroner Art Plan Project, which I curated from 2002 – 2011.

The aim of my response and of The Trekroner Art Plan Project, was to facilitate critical discussion between different professions and create possibilities for inserting the unplanned within contemporary urban planning processes, “allowing artistic interventions to be realised within a prescribed environment which simultaneously critiqued the planning process and giving local residents a chance to contribute to their built surroundings”. (From Claire Doherty and Paul O’Neill (ed.) Locating the Producers: Durational Approaches to Public Art, 2011)

As for The Memory Box Project, the physical form I originally imagined was a two tall cylinder-shaped architecture with planted deeply directly into one of the sloping hills of the new urban area.

The roof and veranda formed an informal balcony structure, serving as a viewpoint over the physical area on the outside. The two cylinders were to be approximately 4 meters in diameter, one of which had windows to let in daylight, and were intended for various local exhibitions. The other was to be dark and would contain a digital archive of memories and only furnished with large electronic screens on the walls and on the floor. A visitor would trigger projections of all kinds of stored memories, but in a random combination; Factual information, anecdotes, reproductions of earlier municipal visions, documentation of the visiting artists’ contributions to the area and photos from social gatherings  – all mixed in irregular combinations.

The essence of the Memory Box is the conscious use of chance to describe the history of an urban area – that precisely lacks a proper history .The archive is to continuously to be expanded through my own documentation, and through all kinds of documents from local events, details of every day life and of same, etc etc.

The organisation and administration of the Memory Box was to be done jointly by local homeowners, Roskilde Museum and Roskilde University. All of them could contribute to the collection and to a broad spectrum of exhibitions in the little pavilion.

In order to mount an image of what the Memory Box Archive might contain, I presented in 2003  a wide spectrum of “memories from a city that not yet exist” in the exhibition OVERBLIK – Kunsten og den ny by at the Museum of Contemporary Art in Roskilde in 2003.

Below some few examples of images within the collection of the Memory box Project: An interior from a one family home in 2003, a bus tour with myself as a guide 2004, the interior of the new student apartmenets in 2002, a table with all possible documents and plans regarding the area from 1970 until 2003, and finally documentation of my soup debate with municipal planners in 2002.